Today Zambia  Celebrates 10 years since we won the Africa Cup of Nations in 2012 in Libreville Gabon. The triumph came after Zambia managed to reach to the finals twice in  1974 and 1994. The squand was led by   Herve Renard, Zambia beat Ivory  on post match penalties after the match ended all draw  in regulation time and extra time.
#Happy10thanniversary
#FAWUZREMEMBERS 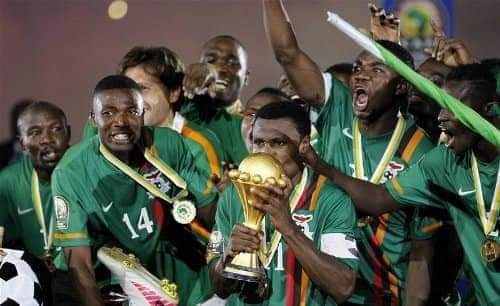 Ten years ago AFCON 2012 threw up one of the biggest surprises in international footballing history when Zambia, 10th favourites at 40-1 before the competition started, shocked favourites Ivory Coast (and others) by winning the final in Libreville thorough penalty shootout. It was the culmination of a heady three-week adventure analytically,  from a storyline point of view. In April 1993, most of the incredibly promising Zambian national squad – their eyes on a place at the 1994 World Cup spot and victory at the 1994 Cup of Nations – died  when the military plane transporting them to a World Cup qualifier in Senegal, crashed into the sea shortly after taking off from a refuelling stop in Gabon.

Although a rebuilt team, based around star striker Kalusha Bwalya (who had avoided the 1993 disaster due to the fact he was, as a PSV Eindhoven player, travelling to Senegal from the Netherlands) finished as runners-up at AFCON 1994, Zambia never made it to the 1994 World Cup and are still waiting to appear at one. By 2012, Zambia had slipped back firmly into the second tier of African footballing powers, often capable of getting through the group stages in many editions of the AFCON, but usually despatched by one of the continent’s big boys, invariably due to a lack of goalscoring threat. In 2010 Zambia made it through the group stage in first place ahead of Cameroon, Gabon and Tunisia, but then went out on penalties to Nigeria in the quarter-finals after a 0-0 draw. Disappointment once again. On to 2012, then, and try again.

AFCON 2012 was full of players who had graced the club scene in Europe for much of the previous decade and would do so in the future, from Kole Toure to Didier Drogba, from a 22-year-old Pierre-Emerick Aubameyang to a 22-year-old Andre Ayew. Zambia’s squad, in contrast had five players who played domestically, eight from the South African top-flight as well as five from 2009 CAF Champions League winners TP Mazembe from the Democratic Republic of Congo. The only European-based player in the squad was 21-year-old striker Emmanuel Mayuka. He was about to go on to big things, but no-one in January 2012 saw it coming.

The Group Stage
Zambia were assigned to Group A along with Senegal, Libya and tournament co-hosts Equatorial Guinea (partnering with Gabon). Senegal, darlings of the 2002 World Cup, were third favourites for AFCON 2012 but a 2-1 loss to Zambia in their opening match saw them spiral to three defeats from three. A 2-2 draw with Libya hinted that perhaps this time around goalscoring would not be the issue it sometimes had been for Zambia in previous tournaments. That left a showdown in the final group game against Equatorial Guinea on their home turf. A win or a draw would see the hosts finish top of the group, but instead a 1-0 loss saw the Chipolopolo progress to play Group B runners-up Sudan in the quarter-finals, with Equatorial Guinea forced to go head to head with Ivory Coast, who had three wins from three and hadn’t conceded a goal.

Zambia manager Herve Renard was playing it simple, quite literally. His team were set-up in a 4-4-2 for five of their six matches at the tournament, opting for a 4-2-3-1 for the Libya draw. That game was notable, even to casual observers, as a particularly brutal encounter. The ball was in play for only 44 minutes and 48 seconds, while Zambia completed only 53.0% of their passes. Libya’s pass completion against Zambia was 58.0%, compared to 73.6% and 83.6% in their other matches. Renard had found a way for Zambia to compete and they were proving very good at it. 26 of their 42 shots in the group stage were from outside the box. Hitting the channels and shooting from distance was not the way football was about to pivot in the 2010s but when it works – go and ask Wycombe Wanderers – it really works.

As flagged earlier, by winning the group Zambia got to face Sudan in the quarter-finals and it was the most comfortable game of their tournament. Not only did they cruise to a 3-0 win, but Sudan only had five shots in the entire game, while Zambia had nine on target and completed 79.8% of their passes. While the Zambian players celebrated a famous win, Ivory Coast eased past Equatorial Guinea 3-0 on the same evening, Didier Drogba scoring the antepenultimate and penultimate AFCON goals of his career. Zambia had dodged their ways into the semi-finals superbly but there was no way of avoiding the big boys now. It was Ghana next and then the winners of Mali against Ivory Coast in the final.

Ghana had been continental champions in 1963, 1965, 1978 and 1982. A third place finish in 2008 and a second place in 2010 (along with coming so close to reaching the 2010 World Cup semi-finals later that year, thanks a lot Luis Suarez) led many to assume the top prize was coming their way in 2012, but the Zambia narrative bandwagon just couldn’t be stopped. In an absolute name-on-the-trophy display, Zambia faced 18 shots in the semi-final, including a wasted first half penalty from Asamoah Gyan, while generating just eight themselves, six of them from long range. But amid a man of the match performance from goalkeeper Kennedy Mweene – ‘keeper of the tournament for 2012 and actual goalscorer at AFCON 2013 – Zambia sucker punched Ghana with 12 minutes to go thanks to Emmanuel Mayuka, one of seven players to score three goals in the 2012 tournament, including Drogba and Aubameyang, but the winner of the Golden Boot. Such antics earned him a £3m move to Southampton but he failed to score with the English coastal side and the Premier League would have to wait until 2020 for its first Zambian goal, via Leicester City’s Patson Daka. The semi-final was a battle, and Zambia embraced that battle. Their reward was a place in the final.

There was no avoiding the fact that Ivory Coast were huge favourites for the AFCON 2012 final. Their Golden Generation were due the title; it had been 20 years since they had last been African champions. They hadn’t even conceded a goal in this edition and, to be fair, nor would they do so in the final. The continent’s best defence against the hyper-practical Zambians? 0-0 was predicted by many ahead of the game in Libreville, less than a kilometre from the sea that tragically claimed the Zambia squad in 1993, and so it proved. The Ivorians correctly shackled Rainford Kalaba, who had created at least two chances in each of the previous five games but was restricted to only one in 120 minutes in the final.

The match was so restrained that Zambia were able to record their second highest pass completion of the tournament at 76.1%. There were 33 shots in the match but only seven of them were on target. The most famous shot in the game was definitely not on target, as Didier Drogba’s penalty (Zambia conceded two of the seven penalties at the tournament, in the semi-final and final, yet didn’t concede from either) was blazed over like some sort of Ivorian tribute to Chris Waddle.

Drogba would make amends of sorts in the inevitable shootout, and personally later in the year with Chelsea in the Champions League final where he scored the winning spot-kick, but that was no solace to Ivory Coast fans in February 2012. In sudden death Zambia didn’t take advantage of a Kolo Toure miss, but when Gervinho failed to score at 7-7, defender Stoppila Sunzu did what defenders do and hammered it down the middle. Zambia were continental champions for the first time. Nothing would bring the 1993 team back, but their memory had at last been honoured.

Ivory Coast’s response to this shock of shocks? If you can’t beat them, join them. In 2014 they appointed Herve Renard and his collection of dress shirts as their manager, and a year later he won the competition for them too, the first manager to lead two different countries to AFCON succes